Q & A: Busch on Raikkonen deal 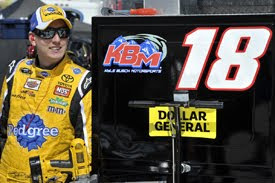 Q & A: Busch on Raikkonen deal By Diego Mejia Saturday, April 2nd 2011, 20:43 GMT Kyle Busch spoke to the media at Martinsville Speedway following the announcement of his deal to run Kimi Raikkonen in a limited schedule this year in the NASCAR Camping World Truck Series. AUTOSPORT was there to hear from the NASCAR star. Q. How did the deal with Kyle Busch Motorsports and Kimi Raikkonen come together? Kyle BuschKyle Busch: Agents... that's how it came about. I have yet to speak to Kimi myself. Apparently there's an interest in him that he wants to run in NASCAR. He's shopped it around to quite a few teams and apparently we won the war. It's exciting for us at Kyle Busch Motorsports. Kimi, from what I understand, was real adamant about trying to work with me and our teams and being able to put a deal together to go out there and try to get him success in NASCAR. With our trucks, the way we've been running this year, he felt like that was a good place for
2 comentários
Leia mais 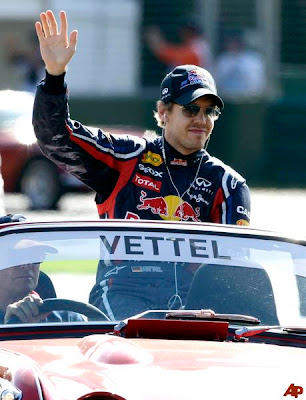 Bem bacana a entrevista abaixo com o campeão do mundo Sebastian Vettel. Agradeço ao nosso amigo e leitor Milton que deu a dica por e-mail. If you’re being paid to travel the globe whilst racing some of the world’s most technologically-advanced cars, many would say you are living the dream. But if you’re already an F1 driver, and have firsthand experience of the glitz, glamour and glory, what would you spend your time daydreaming about? Red Bull’s Sebastian Vettel reveals his Formula One fantasies, which include battling team mate Jochen Rindt around the Nurburgring’s Nordschleife in a McLaren MP4-5… Q: You must choose a city for a new Formula One street circuit - which city, anywhere in the world, do you choose, and why? Sebastian Vettel: Very clearly and 100 percent New York. There have been rumours lately and I think that it would be the ultimate city to race in. Everybody knows New York and it would be awesome to be part of such a race. The paddock in Central Park and racing a
1 comentário
Leia mais 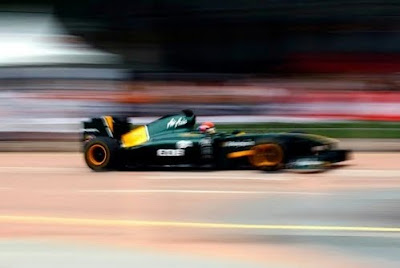 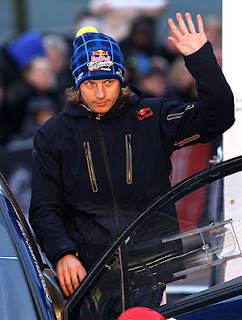 "Räikkönen to a NASCAR-test already next week" by Heikki Kulta 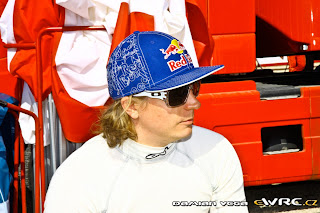 Räikkönen to a NASCAR-test already next week Turun Sanomat 1.4 2011 21:51:51 Kimi Räikkönen will drive a NASCAR-car for the first time on an oval track already next week. According to Autosport -website Kimi will test Kyle Busch'es Toyota Tundra Gresham Motorsports Park in a short oval race in Jefferson, Georgia. The team has admitted the contacts with Räikkönen and also that the tests begin on Monday. Kyle Buschin autoilla on nimissään tämän miniovaalin rataennätys viime lokakuulta. They have won two of the last three World Camping Truck -races with Kyle Busch and they lead the manufacturer's serie to which every point their trucks score are counted. – Neat when these dudes with F1- or some other formula-backround try to jump into NASCAR-circles, Busch estimates Räikkönen's prospects. – It kind of opens the world to NASCAR. Everybody thinks that F1 is a championship-serie... I think that NASCAR is just as big and many drivers want to see how they would succ
Postar um comentário
Leia mais 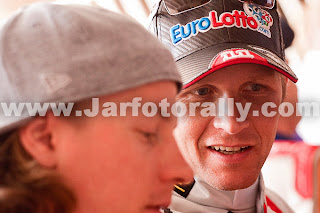 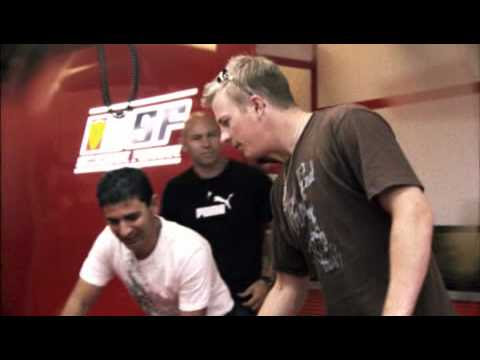 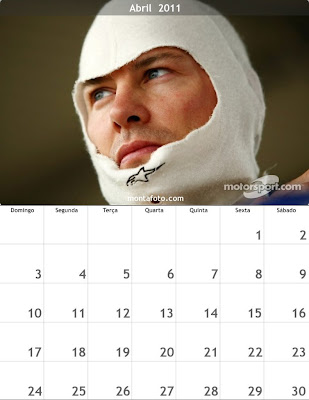 Raikkonen to test truck next week 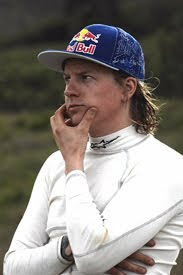 Raikkonen to test truck next week By Diego Mejia Friday, April 1st 2011, 16:33 GMT Kimi Raikkonen is set to have his maiden stock car test next week, driving for NASCAR star Kyle Busch, who fields a leading outfit in the Truck Series. AUTOSPORT has learned that the former Formula 1 world champion is set to drive a Toyota Tundra for the multiple NASCAR race winner and former Nationwide Series champion, who has fielded the #18 Truck entry since 2010. Team officials confirmed contact with Raikkonen and also a test being set for Monday at Gresham Motorsports Park, a half-mile track in Jefferson, Georgia, where the former Ferrari and McLaren racer will get his first taste of an oval. Kyle Busch currently holds the NASCAR track record at the venue, set in testing last October. Kyle Busch Motorsports has won two out of the three Truck races run this year, with Busch taking victory at Phoenix, while Kasey Kahne drove to victory lane in the #18 truck at Darlington. The outfit currentl
4 comentários
Leia mais 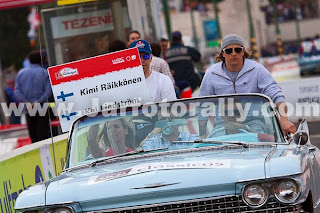 Ler os textos do Kimi é sempre um exercício bacana para tentar entender um pouquinho do que se passa na cabeça do Iceman. E devo dizer que é muito bom saber que o que a gente vê nos textos é o que ele realmente passa para gente quando está lá, no rali, pilotando. Portugal realmente não foi fácil. Ele teve problemas no primeiro dia, mas como o Iceman mesmo mencionou, quanto mais ele pilota, menos situações complicadas aparecem. É isto aí Mr. Räikkönen. Keep up with the hard work!! TOUGHEST RALLY, NO BLUNDERS Just like we remembered to begin with, Portugal is a difficult rally. When the stages are difficult the challenges are spectacular. Yet we could drive for three days without blunders. It left us with good feelings and we got yet again more points. Now we have two rallies from this season under our belt and we have kept the car on the road. In Portugal the consistency, somekind of evenness, was found. In that sense it's good to look ahead. When you can drive a rally lik
Postar um comentário
Leia mais 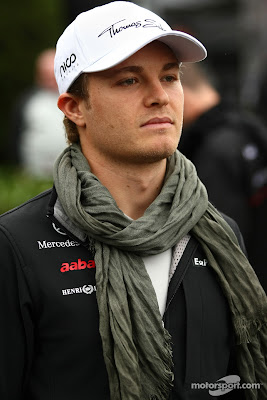 "Here and There" by Appletree 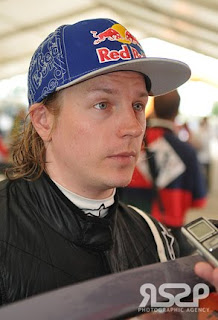 Oi gente! Deixo para você mais um texto da Eeva. Bem bacana, como sempre! HERE AND THERE I had to belive the ice age had come. It's april, for god's sake and we have still thick snow banks and only during the afternoons warmest moments a few drops of water barely reach the snow. My tree was awake. But it was so silent and I knew why. The nature had had again one of its violent tranformations and it hurts, as unbelievable it sounds. But the nature suffers too and humans too often forget they are part of the nature. My tree hears and feels all the feelings of the earth. I just smoothed out it's old bark and looked to the south. Somehow I got the feeling we will have our spring and running waters in a sudden outburst.. Where are you, my little ice berg? What are you doing? Are you pushing thru the stormy and salty water and growing fast? What secrets lies under the surface , there were the sunlight doesnt reach? "Well, dont ask, just go there and look yourself
4 comentários
Leia mais 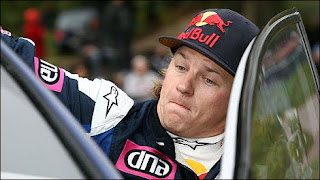 NASCAR has accepted Kimi Raikkonen's request to race in Truck series By René Fagnan, March 31, 2011 Former Formula 1 driver and world rally competitor Kimi Raikkonen has officially applied to start racing in one of the three top NASCAR series next month. Following the surprise “rumour” that the ex-Ferrari F1 driver will enter selected rounds of the Truck series this year, NASCAR has confirmed via Twitter that the Finn's request had been approved. NASCAR also directly confirmed the news to Auto123.com NASCAR correspondent Lewis Franck. “I can confirm that Kimi Raikkonen requested and was approved for the NASCAR Camping World Truck Series race at Charlotte Motor Speedway on May 20,” said Amanda Jones Ellis, Manager of Communications, NASCAR Camping World Truck Series. Raikkonen will race with ICE1 Racing, with which he will also compete in at least eight rounds of the World Rally Championship this season, driving a private Citroen DS3. However, there’s still no off
Postar um comentário
Leia mais 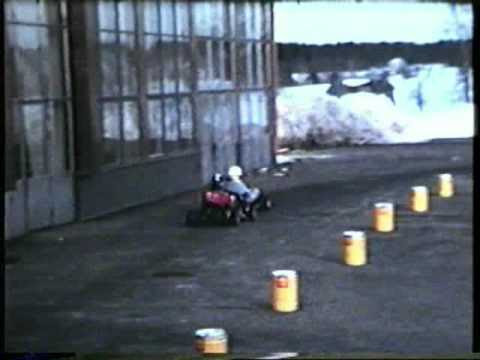 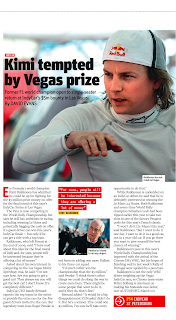 - março 31, 2011
Saku Koivu combined Gillett's and Räikkönen's NASCAR-path Turun Sanomat 30.3 2011 23:14:06 Foster Gillett, who lured Kimi Räikkönen into NASCAR-challenges was following his future star driver's grips in the rally in Portugal, which he also attended. At the same time I got offered a chance to explain some backgrounds to Räikkönen's surprising switch when Gillett gave Turun Sanomat an exclusive interview. NHL-star Saku Koivu had his share in Gillett and Räikkönen making contact. – We owned Montreal Canadiens for nine years. I attended every game and lived with the players in both down- and uphills. The most challenging and critical situation I have ever experienced was Saku's battle against cancer. – At that time we were the team-owners for the first year. I was 23-years old. We didn't know well, Saku and I, but that period connected us very closely. My family did all they could to help Saku win his battle. It was a worthy victory. Saku is alive, he is
3 comentários
Leia mais

Formula One Champ Kimi Raikkonen to Race in Nascar in May 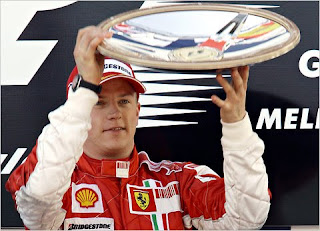 Formula One Champ Kimi Raikkonen to Race in Nascar in May By DAVE CALDWELL Kimi Raikkonen, the 2007 Formula One world champion, has requested and received approval to run in a Nascar Camping World Truck Series race at Charlotte Motor Speedway on May 20, said Amanda Jones Ellis, a spokeswoman for the series. Turun Sanomat, a newspaper in the racer’s native Finland, reported Tuesday that Raikkonen, 31, is expected to race with a new team in the truck series, followed perhaps by a move to the Nationwide Series and then into the Sprint Cup Series, the big leagues of stock-car racing. Raikkonen did not disclose how many truck series races he planned to drive this season. “I’m really looking forward to get there to familiarize to the world of Nascar,” he told the newspaper. “I have been following it for a long time. I just love the American spirit of racing. Obviously, it will be very challenging and great fun for me.” Raikkonen would not be the first former Formula One driver to move
10 comentários
Leia mais
Mais postagens