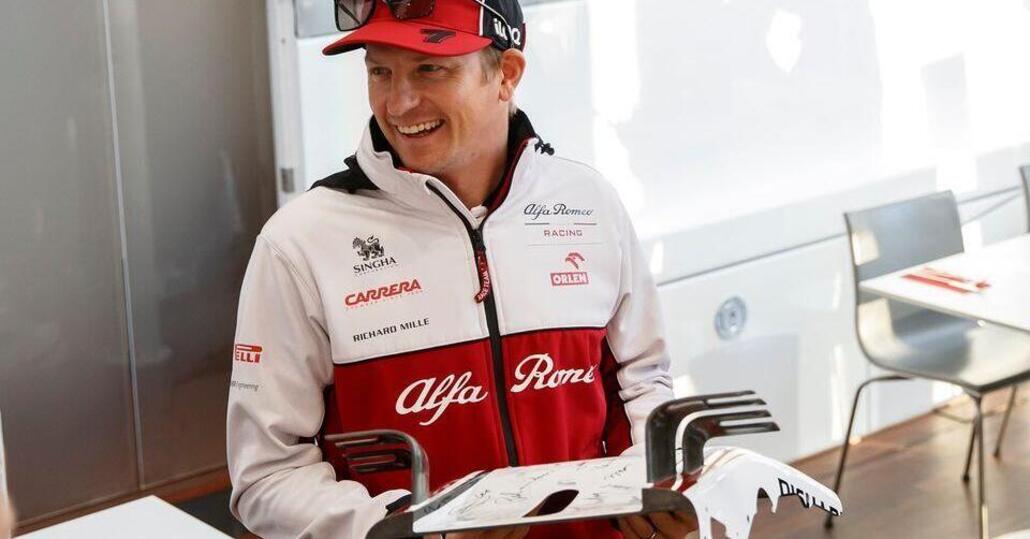 The Alfa Romeo driver, former world champion with Ferrari, talks about his life outside the circus and the future: still on the track.

328 times Kimi Räikkönen and he doesn’t show it. The senior driver and recordman of F1 seems to be living a second youth with Alfa Romeo, which has extended his contract also for next season, bringing his presence with the Biscione team made in Switzerland to three years. Yet another year and the attendance record is set to lengthen, perhaps to become something unique on the world scene. Kimi is a very particular character: he is the most social among the unsociable. He speaks in monosyllables, but one is enough to make a complete speech. Kimi Räikkönen is the paradox of modern F1.

Nevertheless, he has the spirit of the drivers of old times, of those who speak little but communicate a lot. The track record is remarkable: an F1 world title with Ferrari in 2007, 21 GPs won, 103 times on the podium, 46 fastest laps, 18 pole positions. And the desire to try again. Married since 2016 to Minttu Virtanen, two kids, Robin (5 years old) and Rianna (3 years old), the unscrupulous F1 “playboy”, the one who presented himself at the official FIA awards ceremony completely drunk, put his head in place. It’s enough to watch a video on social media, put on by his wife, of when he came back from a Grand Prix and his two children met him. As often happens in normal families, with normal lives and not with a job at 300 per hour.

Since you became a father, has anything changed in your life, in the way you do and in your work? “Yes, as I think it is normal for everyone who becomes a parent, even if you don’t expect it. It happens. Others may change the lifestyle thinking about taking care of their children, worrying about them, changing something in their lives, but I haven’t changed anything as far as my attitude on the track is concerned. What I did before I still do. Then, in everyday life, it’s another story, something different happens for sure in the handling of the family, of the children. In this I am very normal.”

We meant to say that before becoming a father, F1 was the most important thing in his life, now maybe it is subordinate to other interests… “Actually F1 has never been the most important thing in my life. Certainly it was the activity that took up most of the time of my day, for the travels, the tests, the commitment it takes to race in F1, but it was never the priority of my life, it took me a lot of time without a doubt, but it was never the most important thing of my life. I repeat, even though it took up most of the time in my life it was not my priority. I never thought and believed that if I couldn’t race, everything else would be meaningless or that it would be shit, I never lived it this way. Obviously I always tried to give my best and do the best when I was on the track, obviously I was disappointed when things went wrong, or when I did something wrong. Then, as soon as I got home, I had a normal life, followed my passions, my family, the things I like and feel good about. With this I am not saying that F1 is more or less important than in the past, certainly now in my everyday life, the normal one let’s say, I certainly have something more important like my children and my family.”

Once you fought for victory and world titles, now the situation is different: how do you find the motivation to do your best with such different goals? “I honestly can’t see the difference, every race I go out on track to fight. I have won 21 Grand Prix and I don’t see any reason for not winning any more in the future. In addition, I would have won more if I hadn’t had mechanical failures and cars that were not always competitive. When I debuted in F1, Ferrari dominated, not as they do now at Mercedes, and I was in another team. Winning at the time was not easy. Now it’s Mercedes that dominates in an impressive way and surely you could have a better chance of winning without this dominance. In 2005 and 2007 I fought to win the world championship, but it’s not that in the other years, when I was at McLaren, I had the chance to do it often, so from a certain point of view I don’t see the difference with today.”

Your son Robin, five years old, has started trying out karts and is racing them, so much that you even joked saying that he’s faster than you are with rented karts: would you be happy if he became a professional driver? “Actually, I’ve never asked myself the question, but if he should, why not? If he wants to… We usually practice when I come back from the GPs, but now the weather is bad in Switzerland, where I live, and in Finland it’s even colder, so we’ve suspended kart practice. I’d say that in a couple of years we’ll have clear ideas about what he wants to do when he grows up and which way to go. If it will remain a hobby or if he wants to do it as a professional and in that case I will give him the support I can offer. Then maybe he will want to play football or tennis, the most important thing is that he does something he likes, without constraints, if he wants to race on tracks, on the road or do motocross. He has to be free and do what he feels.”

If it were up to you, would you prefer to point him to rallies, where you raced in the World Championship, or to the track? “It’s not a problem, he has to decide what he wants to do. I will give him all the help I can. Whether he wants to do motocross, or dedicate himself to dance instead of racing, or if he just wants to have fun with karting. Maybe he could learn to play ping pong, he would have a simpler and less complicated start! For me the most important thing is that my children are happy.”

But of course we remember his beginnings, he was not very talkative with the press, and he remained so for decades: at Monza during private tests, he answered to a precise question: yes I know and he left us with the notebook in our hands. It’s rather difficult to have a chat with him, he seems to enjoy avoiding the press or he doesn’t like it at all… “Ah ah, I remember well, but I can guarantee that I have improved in the meantime. After all, we’re here to talk about it. Also because I can’t do without it today…”

Joking aside, surprised by Ferrari’s current situation? “Well, I really don’t know what to say. I’ve been a Ferrari driver for many years, it’s not the first time that one year they’re very strong and the following season they’re not competitive. Let me take 2008 as an example: we were fighting for the world title and in 2009 we were behind and not at all competitive. I seem to see similarities with the current situation after Ferrari had a winning 2019. This also happened in my time at McLaren, one year you’re competitive and the following year you’re out of the game. These things happen very often in F1. There are things that impact and annoy and some problems they have also affected us in Alfa Romeo with the engine, for example, but I’m sure they will improve. There’s no reason not to do it.”