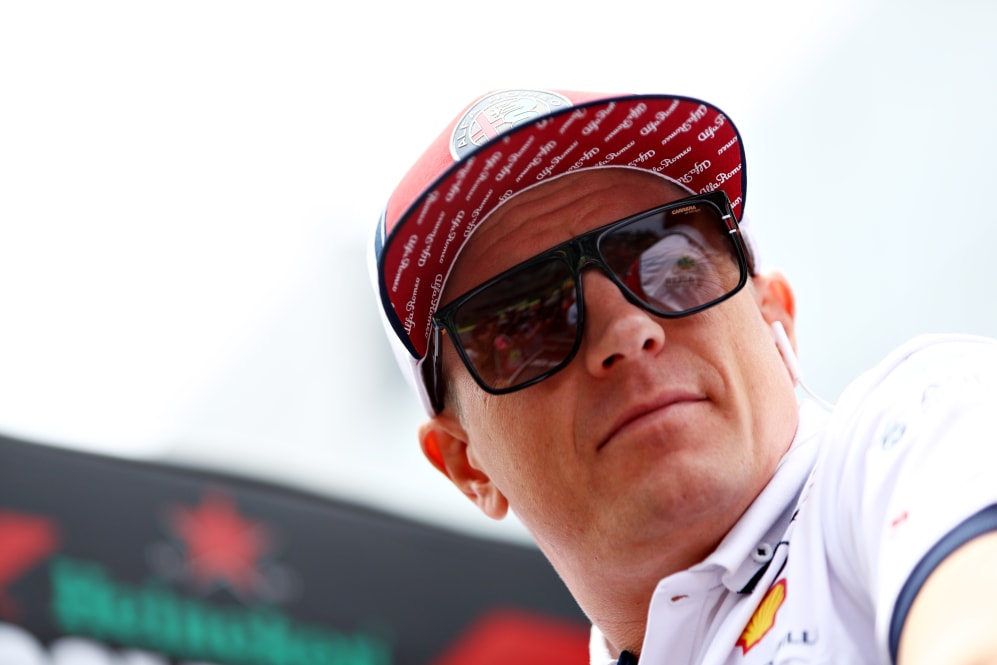 Over the course 16 days in 2012, Kimi Raikkonen found himself in a swimming pool fully clothed, drinking with mates from dawn til dusk, twisting his ankle while trying to imitate football legend Maradona and subsequently missing a test with Lotus who he was driving for at the time. This was perhaps one of his longer and more unruly stretches of such impulsiveness, but it was a lifestyle that he had long been enjoying. 40-year-old-spec Raikkonen, though, is a very different man. He still loves to sleep.

He still loves to have fun with his friends. He still loves to break loose. But such instances are more of a rarity these days. It has become organised fun, slotting in around spending time with his two kids Robin and Rianna, and wife Minttu – and of course his racing commitments.

“Life changes automatically when you have kids,” says Raikkonen, whose face instantly lights up, when I mention his family as we chat on the top floor of Alfa Romeo’s hospitality unit during pre-season testing.

“My life is busier in many ways – and it’s a good thing. You have to plan a bit more. I have a schedule from the team so that dictates a lot the life these days, but we try to do a lot of things as a family where we can. Some days, it’s not always easy, but that’s life.”

Raikkonen’s decision to choose Alfa Romeo as his landing spot after leaving Ferrari was in part because the Swiss team’s factory in Hinwil was close to home. “It helps a lot,” adds Raikkonen.

“When you have to go to do some things for the team, you don’t have to leave the country. You’re there in 40 minutes, do what you need to do, and then you’re back early afternoon. You save a few hours here and there, but over the year, it starts to be a long time.”

From toy cars to go-karts

So whereas a day off may have previously involved waking up at some point and then deciding what to do after his morning porridge – a breakfast routine which remains unchanged – now it involves an early start to spend the day hanging out with the kids.

That used to mean playing with toy cars on the carpet, with motocross races on the TV in the background, but as Robin has grown up, it now involves the aroma of gasoline wafting through the air at a go-kart track.

“Robin asked last summer for quite a long time, he wanted to try [a go-kart],” says Raikkonen. “We took him once, and since we’ve been 10 times altogether. So not very much. He really likes it. For me, as long as he enjoys it, we’ll do it.”

Though Raikkonen has obvious experience in racing, the Finn says he resists that urge to coach his son. “I don’t tell him anything. I just tell him to be careful and not do any craziness.

“I don’t tell him where to drive, or take any lap times. It’s about him enjoying it. If he does one lap and says he doesn’t want to do it, we go home. Last time [before testing] he did 50 minutes altogether. Some days, after a few laps he says ‘I want to do something else!’ It’s a good hobby.

"I don’t look at it that way, if he’s good or bad. Is he good? I don’t know. He’s just turned five. If he enjoys it and wants to do it in three/four years, maybe we’ll look differently. But right now, I’m just happy if he likes something.”

One of Raikkonen’s other loves is Motocross. The Finn is the owner of his own team – Ice One Racing – and it was in this discipline that he got his first taste of motorsport when he rode a children’s Italjet motocross bike for the first time aged three. It’s not surprising, then, that Robin got his first taste of an engine with the two wheel variety at the same age.

“He likes doing that, that’s what he rode already two years ago, a motocross bike,” says Raikkonen. “I think it’s nice he wants to try different things and learn. When they are older, at least they know how a car works or a bike works. So in the future, in their life, it’s much safer if they want to ride bikes.”

Tension on the sidelines

In most sports, it’s not unusual for a father to be seen on the sidelines watching their son or daughter play sport, whether it’s Sunday morning at the local park for five-a-side football or courtside when their kid is playing on Centre Court at Wimbledon. The jeopardy is slightly higher for motorsport parents, given the increased danger element, and while Raikkonen is ice cool in his day job and trusts Robin when he’s on the track, he can’t deny there’s a touch of anxiety.

But doesn’t he get nervous for his kids? “In some weird way, I trust him,” says Raikkonen. “In motocross, it took many months practising braking and throttle, going very slowly. Now he goes full speed on it! So far, nothing has happened. I think the problem is, I can see a lot of things, if you go off here or if you crash there it’s not good, that’s maybe why sometimes I feel more nervous – I wouldn’t say scared.

"If I didn’t know, it would be much easier! I think too much – I think if something goes wrong, hopefully he doesn’t go that way! But it’s been OK. I always say be careful. And he is careful.”

And it’s not just his son that has taken an interest in motors. “Rianna is similar to Robin,” says Raikkonen. “Obviously when kids are a bit younger they try to copy everything their brother or sister does.

"She’s very stubborn. She’s always saying when she gets a bit older, she will be driving Robin’s go-kart. Right now she drives electric quadbikes and stuff. She likes a lot of normal things girls like also. She gives Robin a hard time sometimes. It’s mayhem sometimes!”

Taking Robin karting gives Raikkonen a chance to get his hands dirty again, prepping and fixing the go-kart when required. He has an analytical mind and is a problem solver. He also doesn’t mind getting his hands dirty, which is why at one point in 2017, you would have found him underneath the Ferrari hospitality unit fixing the toilet – a process made easier as it was a system to similar to that on his boat (called Iceman).

“I have always liked to fix things,” he says. “When I was young, we were allowed to do a lot of things, cutting bicycles into parts and building them back together. I would like to do a lot more, but time is more limited. The go-kart is nice to fix, but they are a bit too reliable these days!”

But despite the change in lifestyle, one thing that endures is Raikkonen’s uber cool, laid back mentality. Once he’s left the race track, the Finn – who continues to race at a high level into his 40s – logs out of that world completely. “I don’t have a schedule [on his off days],” he says with a smile. “If we don’t plan to go somewhere, we just see how the day goes with the kids. I don’t want to know if I have something in five days. Just tell me the day before!”