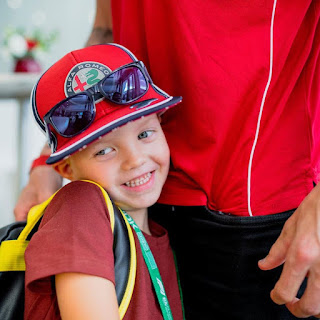 In a special interview for apu.fi, Minttu Raikkonen talks about Kimi’s life at home and whether Robin could become a racing driver

Minttu Räikkönen and the kids closely watch all of daddy Kimi’s races, either at the track or at home on TV. Robin knows a lot about Alfa Romeo designs: “Robin already knows the helmets, which is his father and which his teammate.” But it is not always enough for a 4-year-old boy to see his father driving on television. So Robin insisted on going and Minttu fulfilled his wish of traveled to Hungaroring: “Dad’s driving interests him immensely.”

Minttu says that Robin is starting to have his father’s gestures. Does Minttu now see that Robin could become a racing driver? – “I don’t know, but time will tell. Robin resembles Kimi a lot. Grandma Paula says quite often that she sees Robin as his father’s son. In Switzerland, he has an electric motorcycle that he always wants to drive. It’s Robin and Kimi’s thing, I don’t do it. Robin knows that, he doesn’t even ask me. But when Kimi comes home, he gets to ride his bike.”

According to Minttu, Rianna is also a real hothead who is not afraid of anything: “She goes head 1st in every place. She has my character traits but in Robin I don’t see anything of myself. He is like a copy of Kimi. Rianna is like what I have been when small, really willful. Kimi is a loving father and very wonderful. When Kimi is at home, he is present and lives for his family” – Minttu says.

Kimi enjoys playing with the kids and Minttu reads fairy tales: “Kimi is more of a man of deeds which take a lot of time and does whatever the kids ask for.”