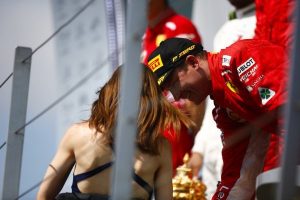 On our way back we saw Kimi Raikkonen being hassled by some overly enthusiastic fans clearly on his way out of the paddock after qualifying. Despite Kimi looking like he had somewhere to be, I decided to introduce myself. Kimi was the other driver I really hoped I might be presenting the award to. I boldly strolled up to him extending my hand and said, ‘Hi Kimi, can I introduce myself? My name is Nathalie McGloin and I’m presenting the third place trophy on the podium tomorrow’. His face instantly broke into a smile and he very kindly agreed to have his photo taken with me. As we were posing for the photo, I asked him how he’d done in quali as I hadn’t seen the results yet. He told me he was third on the grid and I said that it might very well be me who would present him a trophy in that case. He smiled politely and told me that he was hoping to finish higher up than third and maybe I should ask if I could give one of the other trophies out! I wished him luck and headed home for the evening.

What happened next is something I did not expect and something that completely blew me away. As I approached the podium with the third place trophy on my lap to give to Kimi, he recognised me from meeting him the day before and his face completely lit up. He came down from this podium with a huge smile on his face and helped me pick the trophy off my lap to give to him. ‘It’s you!’ he said, to which I responded ‘I told you I’d be here!’. He then shook my hand with an enormous grin and went back up on to the podium to show off his trophy to the crowds. I couldn’t get passed the third place podium due to the lack of space so waved to Lewis and Seb my congratulations. Both of them then got down from their own podiums to shake my hand with Lewis giving a lovely warm two-handed handshake. As I left the podium I didn’t quite know what to do with myself, I was so emotional. All three of the drivers stayed to chat to me and have pictures taken and I couldn’t have asked for a warmer reception from all three of them.