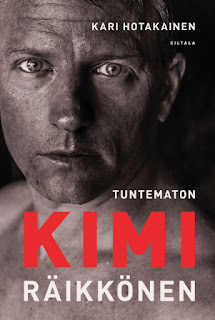 “Unknown – Kimi Räikkönen” will be published in August 2018

Kari Hotakainen, who is among the top writers in Finland, writes a book about Formula One driver Kimi Räikkönen. Unknown – Kimi Räikkönen will be released on Thursday 16. August 2018. The book will be published by Siltala.

This is how the publisher describes the content of the book:

What does a person say, who does not usually talk? What do you think of a person that many people know that exists, but few people know? Coming soon is a fierce, funny and moving book that opens a soaring world even for those who are not interested in motor racing.

Unknown – Kimi Räikkönen is a story of a man who has gone out of humble conditions and broke into the top of an unusual profession. In addition to Kimi, this book also speaks to his mother, brother, wife, and trusted friends. Words are also said by other drivers, team managers, mechanics, physiotherapist, manager and quite ordinary Formula One fans. The book tells about driving, family, trust, free time and the dramatic moments of Räikkönen’s life so far.

“The greatest thing would be if you could drive Formula One unknowingly, Kimi says, and I make sure that the voice recorder preserves this first sentence. And so, Kimi knows that there is not such a world and it will not come. Unknowingly, you can shave or drive a lawnmower, not a seven million-euro racing car.” (excerpt from the manuscript)