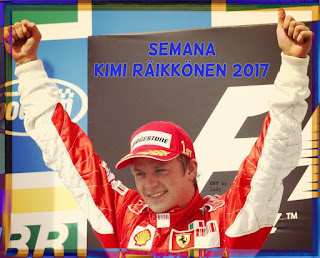 
It will always begin with the butterflies in my tummy on the drive home from my friend's brother's wedding. I couldn't refuse attending so I missed the build-up to one of the most important races of Kimi Raikkonen's career. Shocking, considering I was voted Kimi's biggest fan that year in his official forum awards! Luckily though, I made it home just in time as the grid lined up after the formation lap.

It was evening in London that time, and so it was also my luck that the race wasn't at normal European time otherwise I'd have lost a friend for putting a racing driver first before her! Thankfully all my friends knew what I crazy unusual girl I was.

The nerves disappeared after lights out. I had complete faith in the Iceman's ability unlike the rookie Hamilton. Plus, we had been through such difficult times before that even if something ruined his chance of winning the title it wouldn't be new... He was our champion already, for 2003 and 2005, if it wasn't for car problems beyond his control. The first lap proved my faith right - Kimi remained strong but Hamilton pushed too hard; panicked and lost positions.

But when the race progressed, it felt like I was in a dream. It was going Kimi's way, finally. It didn't seem real. My knees were shaking; with 3 laps to go, it became more and more real. When Kimi crossed the finish line I cheered but still remained calm, I contained my happiness for some reason... perhaps its the way we've been let down so many times by some outside factor. It was only up until I heard Chris Dyer's team radio to Kimi that I felt so happy and relieved. Then it went back into feeling like a dream. Maybe it was the time difference. Maybe it was just the incredible feat of Kimi's triumphant victory against the odds. It wasn't till I heard the Finnish anthem on the podium and seeing Kimi's beaming smile, his eyes moist with tears, that I cried. After years of struggles in difficult circumstances and rises to falls, and the heartbreak of missing the dream not once but twice, my hero finally had his wish come true. And in many ways, I felt one of my wishes come true too.

Like Aragorn said in The Return of the King, "this day does not belong to one man but to all" it really felt as if it was a victory for the good nice guys, and those who kept faith with Kimi especially the loyal fans who, like me, weren't entirely happy with his move to the Red side. Regardless of where it happened, from humble beginnings he ended up on the top of the world. For that reason, October 21st 2007 will always be a very special day in the hearts and minds of the Raifosi. I don't think I slept that night!

You can re-live it here 🙂


Oh God!!! Reading your article again to prepare this post was an emotional ride, Saima!!! Thanks a lot for accepting my invitation.

And the videos to complement the article were so on point. I miss your videos!!!! It's such an incredible feeling to be able to watch them and travel through time.

Once more, thank you very much!!!