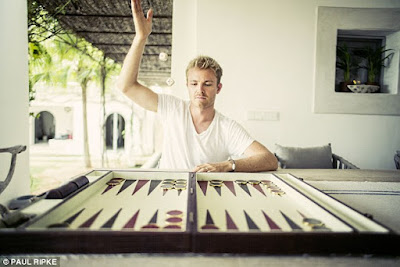 Nico Rosberg walked away from Formula One days after becoming world champion: 'I look at my calendar for March... it's totally blank!'
t seems slightly odd to be talking about sacrifices when you are a multi-millionaire son of an even richer father while sitting close to your Monaco apartment on the hills above the aquamarine tints of the Mediterranean.

This is how it is for Nico Rosberg, the Formula One world champion who walked out of his high-speed business just five days after realising his lifetime’s dream by taking the title against his oldest rival, team-mate and sometime friend Lewis Hamilton.
In his first major interview since he stunned the wider sporting public by going out at the top, forgoing his £18million-a-year contract to drive on at Mercedes, he talks more candidly than he could when he was in the maelstrom of the biggest contest of his life, the battle he won at the Abu Dhabi Grand Prix last November.

He paints a picture of a man who squeezed out every drop of his talent in a one-off attempt to do what he had never managed before in any series: beat his old karting pal over the course of a season.
By sacrifice, he raised himself to a level of intensity he could never hope to replicate.
One small example: ‘I stopped cycling in the summer to lose one kilo,’ he says. ‘The next race I was on pole in Suzuka by one hundredth of a second. One kilo is worth three hundredths per lap. So I was on pole thanks to losing my leg muscles. It got me the win. Those were the small details I went into.’

Now he sits in his seat, with the Med over his left shoulder, and declares himself ‘very relaxed’. He says: ‘Start wherever you want.’

Well, let’s start at the end of his career, with that momentous decision to quit aged 31, an upheaval that some observers thought he should have mulled over to be certain his mind was settled. Others said he should defend his title.

‘I can tell you this,’ he says. ‘My Formula One career book is closed with the most awesome ending I could have imagined. And I love books that end happily.

‘I am turning my life upside down, so it will be full of challenges. The underlying belief, however, is that it felt totally right. I am following my heart.

‘Now I am excited because of all the freedom I have. When I was racing I was in a hamster wheel, a good one, of course, and I am so thankful for everything it gave me. I wouldn’t do anything differently.

‘But to be the best in your sport you have to make a lot of compromises.

‘Now I look at my calendar for March and it’s totally white, blank from start to finish. I can decide to explore whatever I want to. It’s about spending more time with my family, which last year was a serious shortcoming.

‘It’s learning to play the guitar. You need to be in one place for a while to be with your teacher and get into a rhythm. That’s a ridiculous, small example. There are bigger things, too: I have received so much in my life: the world championship, my family. I’m exploring what I want to do. Maybe something with kids, 10-year-olds, an age where I can make a difference.’

His decision to retire had been percolating in his mind since that leg muscle-light Suzuka win, the one that put the title in his own hands. He spoke briefly to his wife, Vivian, about it before the final race. He says she would have supported him carrying on, but deep down favoured his coming home rather than risking his limbs further.

They spoke about it again on the night of his championship win. But it took all his courage to inform his team principal at Mercedes, Toto Wolff, calling him rather than sharing the news as they flew over from a sponsor event in the Far East.

When he told one of his closest friends, his mate replied: ‘Now I understand how my sister felt when Take That split.’ It was a good line, but did not help settle his nerves for the call he was relishing least, to father Keke.

Rosberg Snr is a friendly but no-nonsense Finn - world champion in 1982, when he would routinely step out of the car and light a cigarette.

He made multiple millions as a businessman post-career and guided young Nico into Formula One. He then stepped aside to give his son his own head soon after he had established himself at his first team, Williams, for whom he made his debut in 2006 with the fastest lap in Bahrain. 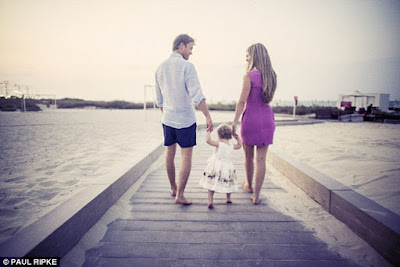