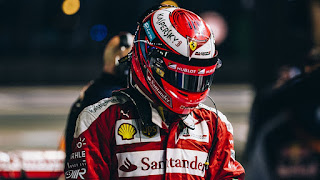 Kimi admits he ‘had to push a bit over the limit’

“Today we got more or less what we could from our car. Obviously it’s a bit disappointing given where we finished, but this is a tricky place. The fifth position is not ideal, but I was pretty pleased with my first lap in Q3 and the car was handling well. In the last run I knew I had to push a bit over the limit, trying to improve, but it didn’t pay out. I made some mistakes, I went wide in turn 1 and got sideways. There’s no issue with the car, we are just lacking overall grip and in Singapore that makes a big difference. Tomorrow we have to make a good start and then go from there, there will be different ways of using the tires between the teams. The race is going to be very long, and usually there’s a lot happening, so we have to get the timings right and try to go forward.”

Seb looks ahead after qualifying frustration

“Already in the first lap, going into turn one, something happened. Then in turn two, through turn five, I felt that the car was not the same. So far we don’t really know what happened, initially I thought it was at the front, but then it felt like the rear bar had broken. I hadn’t felt anything wrong in P3. Then I wanted to come into the box, but in the end we decided to stay out, and then we came in because it was hopeless anyway, we were just not quick enough, and there was no time within three or four minutes to fix the problem. For tomorrow we have a long race in front of us, with a lot of safety cars. At least we have some new tires, and even if for sure it is not an ideal situation. we can still have a good race.”