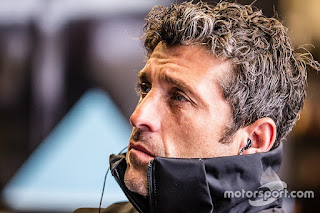 By: Charles Bradley, Editor in Chief

American actor and racing driver Patrick Dempsey plans to produce a new television series based on the events of the 1961 Formula 1 World Championship.

Dempsey, who is best known for his role as Dr Derek Shepherd in Grey’s Anatomy, has increased his motor racing schedule in recent years and is now a regular GT class competitor at the Le Mans 24 Hours.

Now he plans to combine his two careers, and is working on a new racing-based project for TV.

“It is based on the book The Limit, which describes the World Championship fight between Phil Hill and [Wolfgang] Berghe von Trips in 1961,” said  Dempsey.

“We want to tell the story of these men and their lives in a TV series, but we still have a long way to go. The female protagonist is based on a real person: Denise McCluggage, who was a really good reporter and an excellent driver.

“The series shows her relationship with the other drivers. This is one project I’m working on.”

Hill won the 1961 world title, after Ferrari teammate von Trips was killed at Monza, the penultimate round of the championship, after colliding with Jim Clark. The accident also claimed the lives of over a dozen spectators.

Increasing his focus on racing

Dempsey has been racing cars for decade, and formed his own team – Dempsey Racing. He is competing fulltime in the World Endurance Championship in a Porsche.

“2015 is a year of development for me,” said Dempsey. “I’m working on new projects, both in racing and acting/producing – this is the direction I want to go.”

His character in Grey’s Anatomy was killed off in April, and he said he was committed to “focusing now on developing and racing and being a father to my children”.

“My kids are the love of my life, but racing is right up there,” he added. “I find it challenging and satisfying; it is like a dream come true to be able to race with the best of them. You can be a great driver, but you need to have a great team.

“Everything has to work perfectly; everyone has to work together as a whole package, so it is a lot like a chess game really.”