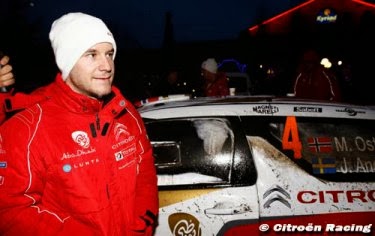 Mads Ostberg edged out Jari-Matti Latvala to set fastest time in this morning’s Rally Sweden shakedown. The Norwegian was quickest by 0.4sec through the 3.99km Råda test near the Hagfors service park.

But with mild weather threatening to ruin tyres, many drivers preferred to protect the tungsten-tipped spikes normally used to bite into the icy roads and cruised through the test.

The tyres used in shakedown can be re-used during the rally, and world champion Sébastien Ogier was one of several drivers who did not want to risk ripping the studs from their mountings on the increasingly gravel-covered roads. He was 12th fastest.

Ostberg (pictured), in a Citroen DS3, and Latvala in a Volkswagen Polo R, each set their fastest times on the last of four runs.

Kris Meeke went third fastest in another DS3, 0.8sec behind team-mate Ostberg. However, his session was interrupted by a trip to the Citroen service area for repairs after he went off on his second pass.

“I lost the line on a left-hand corner, slid wide and the car got sucked into a snowbank,” Meeke explained. “The spectators pushed us back on the road but unfortunately the steering was damaged and we couldn’t continue.

“The rest of the car was fine. It looks like a stone hit the wheel square on and damaged something inside the steering. It’s my first time here, so a bit of an eye-opener,” he added.

Henning Solberg, the only driver using Pirelli rubber, was fourth in a Fiesta RS ahead of Thierry Neuville and World Rally Car debutant Craig Breen.

Other drivers to opt for caution were Mikko Hirvonen and Andreas Mikkelsen who were 31st and 32nd respectively.