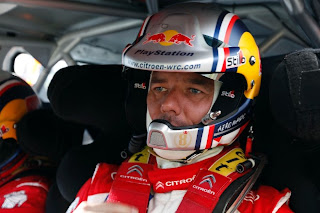 Sebastien Loeb has gone fastest on the Qualifying Stage for Philips Rally Argentina, round five of the FIA World Rally Championship powered by Nokia.

Loeb, the winner in Argentina on the last six occasions, completed the 4.59-kilometre test from Villa Garcia to Cabalango in a time of 2m36.9s to earn the right to select his road position for day one’s stages first.

The stage was held in wet and slippery conditions with drivers opting for the better-suited soft compound option - of which the Michelin runners have a limited supply - or the hard version, which doesn’t work as well in damp conditions but is Michelin’s nominated option for the rally.

“It’s slippery but it was not so bad,” said the eight-time world champion, who selected Michelin’s soft compound tyre. “I had a good drive with no mistakes. I was pushing hard.”

Loeb’s Citroen team-mate Mikko Hirvonen was second fastest. He said: “I was equal with Seb but then I made a small mistake and went wide on one corner. It’s going to be my choice for the road position but we will see for the weather.”

Dani Sordo, who is making a one-off appearance for the factory Ford team in place of the injured Jari-Matti Latvala, was third quickest in his Fiesta RS WRC. “I’m quite happy now, we modified the suspension and it was not so bad,” said the Spaniard, who reported a few handling issues during his two runs of free practice.

Team-mate Petter Solberg opted to run on Michelin’s hard compound tyre, which provided less grip in the slippery conditions. “I wanted to take care of the [soft] tyres for the rally if it’s raining,” said the Norwegian, who set the fourth best time. “It was very slippery in there with a lot of mud and rain now. But it’s a long rally.”

Nasser Al-Attiyah reported hitting a tree with the right-rear corner of his Qatar World Rally Team Citroen. Martin Prokop reported a misting windscreen in his DMACK-shod Fiesta. The Anglo-Chinese firm has nominated its soft-compound tyre with the hard available as the option tyre.