"Räikkönen is training with full steam" by Heikki Kulta 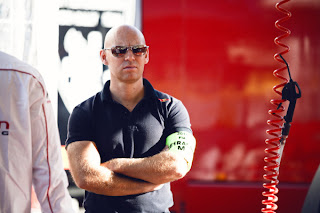 Räikkönen is training with full steam

The speculations in the world about the comeback of Kimi Räikkönen to F1-tracks would at least not fall short on the physical side.

– In rally you don't need as intensive training as F1-driving demands. That's why the programs are slightly different.

– Kimi raced all the time and trained accordingly. Kimi is a sportsman who likes to train and doesn't try to skip it, Arnall tells 'suspicious judges'.

– Generally speaking anybody who has sometimes been in the prime of their life, they never have to start from scratch again in order to lift up their physical condition to a higher level.

Arnall knows what he is talking about. He has a wide experience from working with sportsmen from different genres.

– When I was in Surrey University there was also Allan Wells, 100 meter sprinter who won Gold in the Olympics in 1980. When our paths crossed I worked with Allan although he wasn't running any longer. Allan is not a young man anymore but he is still in excellent condition. If a physical condition has been taken care of the right way, then it's valuable.

– The biggest difference between F1- and rally-driving is the driving position and how different muscles are strained, Arnall compares.

– Generally speaking training in F1 compared to rally differs because of it's intensity. A F1-driver has to always be in a really good stitch. Hence rally is in a certain way easier for the body than F1 is.

– If Kimi would go back to a F1-car, then the biggest work would be the process of strenghtening his neck muscles. He hasn't had that for two years. His neck muscles aren't the same as they were during his F1-season.

– However it's not a question of them not being restored. The situation is the same as when a F1-driver has a three months break between the seasons. When you go back to the winter testing the neck is always sore after the first day. You can't really train the neck muscles other than by driving. You get those muscles only by driving.

– Endurance, strenght and muscles will come back. Kimi has all along been training with the mindset of someday driving in F1 again. I can assure that he is in a good condition, Arnall emphasizes. Turun Sanomat, Salou HEIKKI KULTA
Fonte: Turun Sanomat/ Tradução para o Inglês: Nicole