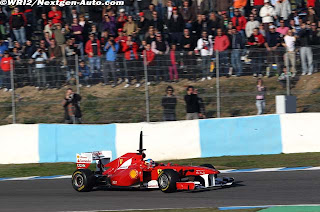 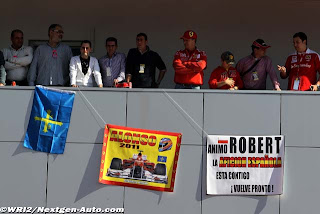 Huge crowd turns out to see Alonso on track
Jerez de la Frontera, 12 February – When the engineers and mechanics set off for the track this morning, it must have felt more like preparation for a day’s testing at Fiorano rather than Jerez, as there was so much fog hanging over the circuit. Then, luckily, it cleared away and a warm sun heated up the track, while there was also plenty of warmth flowing from the thousands of fans who arrived here in the early hours. The queues at the turnstiles, wanting to get in to watch testing, were hundreds of metres long by eight o’clock. With all due respect to the other drivers, all eyes were on the red car with the number 5 on its nose, belonging to Fernando Alonso. The Spaniard began driving shortly after nine and concentrated mainly on a comparison between all four types of tyre brought here by Pirelli for this test, while this afternoon, he will work on doing some long distance runs. The programme is very similar to Felipe’s from yesterday and it seems to be moving forward in the right direction. Before the lunch break, Fernando completed 49 laps, the quickest in a time of 1.20.493, which at least up until 13.40 is still the fastest of the day.
Just like the drivers who ran on Thursday, Fernando wanted to show support for Robert Kubica and the Spaniard is running today with an image on his helmet which is a copy of that used by his Polish friend.
(fonte: Ferrari.com)
Bjinhos, Tati
F-1 Fernando Alonso Pré-Temporada 2011