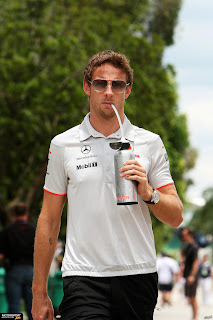 A outra vez que postamos esta entrevista aqui no Octeto o foco era o nosso octete baby: Sebastian Vettel (para quem não leu, clique aqui).
Agora chegou a vez do nosso campeão do mundo Jenson Button.
The Secret Life of Jenson Button
Ever wanted to know your favourite Formula One driver a little better? Ever wanted a glimpse inside their lives outside the cockpit and see what really makes them tick - away from the race track? You can with the help of our series, The Secret Life. Reigning world champion - and McLaren driver - Jenson Button is our latest target, as he reveals a hatred of greasy food, a youthful interest in British reggae band UB40 and a one-time penchant for see-through shoes…
Q: Are you the kind of guy to have a ‘Plan-B’?
Jenson Button: No, I never have a ‘Plan-B’. That’s one of my weaknesses, obviously.
Q: What is your favourite high?
JB: Winning gives me the best high. The adrenalin buzz of winning.
Q: Who is your dream date?
JB: I don’t have any dream dates. I have a girlfriend and I am a one-woman man!
Q: Which film makes you cry?
JB: Not many. Actually ‘The Notebook’ almost made me cry. And also ‘Days of Thunder’… no, not really, that was a joke.
Q: What are you afraid of?
JB: I don’t like sharks and losing, I suppose. It’s the abhorrent opposite of winning!
Q: What was the last book you read?
JB: ’Breaking Vegas’, which is about gambling.
Q: What was your biggest (non-Formula One) speeding fine?
JB: I think it was around £500, something like 600 Euro. That was in 2000. I cannot remember how much over the speed limit I was.
Q: Name five things that you hate?
JB: When it’s raining and you don’t have an umbrella. Greasy food, I hate greasy food. I hate losing, the economy and people who are negative.
Q: Have you ever dyed your hair?
JB: I did it when I was younger. I was around 14. I dyed the front very blond. It looked horrible.
Q: What was the first CD you bought?
JB: It was a band called UB40. It was a long time ago. The single was ‘Rat in the Kitchen’.
Q: Do you have any tattoos or piercings?
JB: No piercings. I have three tattoos at the moment, but I’m getting a fourth when I’m in Japan. What two of them mean I cannot tell you, it’s private and in Japanese. That one (on the right side of his hip) is a button… that’s obvious.
Q: What did your teachers say about you in your school report?
JB: I tell you what, I wasn’t so bad in lessons but I was a bit poor at concentrating. My mind always used to be thinking of something else - I was always thinking about racing.
Q: Who were your childhood heroes?
JB: Someone I really admired was Alain Prost - his driving. I also admired Nigel (Mansell), who was always fun to watch. Outside of Formula One, there wasn’t really anybody.
Q: Do you have any guilty pleasures?
JB: Nice cars! I love banoffee pie, but I don’t eat it very often, so there’s no guilt involved.
Q: Do you collect anything?
JB: Cars and watches - the typical habits of a racing driver.
Q: What would you die for?
JB: Nothing, except my family.
Q: What was your worst buy?
JB: I bought some see-through shoes. For some reasons I thought that they would look really cool. They were plastic and completely see through. You put them on and could see your feet. That was pretty disgusting. I gave them to a friend.
Q: How do you take your coffee?
JB: I like a macchiato with one sugar.
Q: Your ideal non-race Sunday morning?
JB: Maybe doing a triathlon. I don’t do it very often, but I love pushing my body and myself to the maximum. Or spending time with friends and family, and my girlfriend. Relaxing, maybe on the beach or climbing up a mountain.
Q: What was your first car?
JB: It was a bike. A little Yamaha 50cc, when I was seven years-old. I was very lucky.
Q: What’s the most embarrassing mistake you’ve ever made?
JB: I don’t know. I am sure there are a lot and my friends could probably answer that one immediately. I try not to remember them!
Q: What is the best thing that you can cook?
JB: Pasta is easy. Everyone can cook pasta. And that’s about it for me. I can do the sauce from scratch.
Q: When was the last time you were really angry?
JB: I think I was furious with myself last year in Brazil in qualifying. I was pretty angry about choosing the tyres I did. That was when I was really angry. I thought that the championship might slip away. It was a pretty big day for me.
Fonte: Formula1.com
Beijinhos, Ice-Ludy
Jenson Button