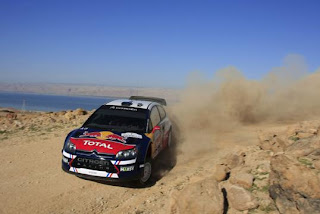 New horizons for the Citroën Junior Team
Por Scott Coursey
Just 10 days after the finish of the Jordan Rally, the Citroën Junior Team goes to Turkey for the fourth round of the FIA World Rally Championship. Sébastien Ogier/Julien Ingrassia and Kimi Räikkönen/Kaj Lindström will drive the two Citroën C4 WRCs on this new event based close to Istanbul.
A few days after the Jordan Rally, the Citroën Junior Team embarks on one of the three brand new events scheduled for the 2010 season. Prior to Bulgaria and Alsace, the team will contest the all-new Rally Turkey, based in Pendik on the outskirts of Istanbul. The event will take place on two continents with a start ceremony outside the Hagia Sophia mosque and stages on the Asian side of the Bosphorus River.
In total, 12% of the 358.84 kilometres scheduled will be on asphalt. During the second day, the 18.17-kilometre Göçbeyli stage (SS10 and SS14) will feature 13.49 kilometres of asphalt. The final section of Bozhane (SS12 and SS16) is on asphalt as well, and parts of the Riva and Ballica stages are also run partly on sealed surfaces.
Sébastien Ogier and Julien Ingrassia have consistently challenged the frontrunners since the start of the season, and showed their ability to be competitive on all sorts of different surfaces. On the Rally of Turkey, which is a new event for everyone, the 2008 Junior World Rally Champions will be able to fight on equal terms. “As was the case in Jordan, it’s going to be important not to make any mistakes,” said Sébastien. “This is a brand new rally for all the crews, so for the first time this year we start on a level playing field against the other WRC drivers. The recce will be extremely important. We’re going to try and fight with the leaders on this event just as we did in Sweden, Mexico and Jordan. The whole team has done a great job since the start of the season, which our good results have proved.”
Kimi Räikkönen and Kaj Lindström scored their first WRC points in Jordan by finishing eighth overall. “It was important to get to the finish of this particularly difficult event,” said the former Grand Prix champion. “It was only my eighth-ever rally, but also the most difficult one I have seen so far.”
In Turkey, the Finnish crew will face another totally new route and surface. “I’ve no real idea of what to expect from the stages in Turkey,” added Kimi. “We’re going to need to do a lot of work during the recce in order to start off the rally well. Our goal is to be at the finish again, and to gradually reduce the gap to the other WRC drivers.”
Fonte: RallyBuzz
Beijinhos, Ice-Ludy
Citroën Junior Team Kimi no Rally Kimi Räikkönen Rally of Turkey 2010 Season 2010 WRC