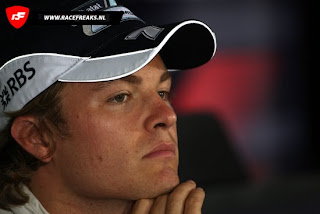 Q: Nico, obviously there was the incident in Canada. Looking back on that how do you see it?
Nico Rosberg: It was just unfortunate really that I didn’t expect the red light and that’s it. It is a new situation and we have seen many people go through it because it is a new rule. In the pit stop there are a lot of things you have to do and I just I didn’t think of that. When you don’t expect something it takes a while to react to new situations.

Q: Does the penalty change your approach to the weekend?
NR: Definitely, yeah, because more or less it is going to be very difficult to improve many qualifying positions as I get 10 positions and if I make it into Q3 I am more or less going to be last anyway. It does make the approach quite different. We need to think about trying to pass people, trying to not have so much understeer when I am running right behind people and to be able to pass into turn five. There are all these things you have to think about and also to compromise your qualifying for that.

Q: Does it also change the strategy as well?
NR: Yeah, definitely. It is very different actually and people are just trying to think out of the box and see what you come up with.

Q: I can imagine the last few races have been quite frustrating for you in terms of results?
NR: Yeah, definitely. We had a good start to the season and then it was a bit more difficult on these normal tracks like Turkey and Barcelona. But still we were picking up the points which was good. In the last two races the team gave me a very good car, it was pretty strong, and I was really happy and feeling comfortable. I was very happy with the pace in general but unfortunately difficult conditions in Monaco didn’t go my way that weekend and then with Canada it meant two bad races. It is the way it goes and now I need to look forward.

Q: And how was this afternoon as the position does not look all that good?
NR: Yeah but you never know how much fuel you have. I was full up to the top.
It is important for us, even though I get my 10 places and everything, to show pace this weekend. We have made progress and we really need to get on top of things as Renault, Red Bull and Toyota have gone a small step ahead of us lately, so on these sorts of tracks it is really important for us, even this weekend, to show some strong pace.

Q: Fernando, fastest time. Where did that come from this afternoon? 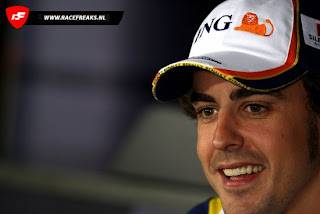 Fernando Alonso: I don’t know. I think it has been a good day for us. The car performed quite well in P1 and P2. I was sixth fastest in the morning session and now fastest in the second session with good balance. We have made some progress in terms of set-up and new parts that we brought here to this Grand Prix as well. They seemed to work fine and for sure I feel elated as if we are quicker than the Ferrari that would be very much a surprise. We are not that fast probably.

Q: It’s quite a Renault circuit this, isn’t it?
FA: Yeah, it seems that when we come to our home Grand Prix everybody works harder, so hopefully we can do many more races in France.

Q: Having said that, you had the problem this morning and retirement in Canada as well.
FA: Yeah, this morning we had an engine problem but that can happen. Obviously, the engines for the races are much more prepared. For testing and Friday practice, the engines are sometimes not completely new and you always have a little bit more risk, so I’m pretty sure that these things will not happen in the races. In Canada it was a frustrating Sunday because the weekend was quite good for us, fourth in qualifying and then in the race we were running – after the crash in the pit lane with Kimi, Nico and Hamilton out of the race – we had a chance to be on the podium but then we were a little bit unlucky with the one-stop car strategies and we were a little bit too slow. So in the end we didn’t finish, so it was frustrating.

Q: Someone described this afternoon as being a touch of the old magic from Fernando Alonso.
FA: Well, for sure it’s one of the races that I’m more concentrated because in Barcelona we had an engine failure, in Turkey I was fifth or sixth – I don’t remember – and in Monaco and Canada no points again. So in the Drivers’ championship I am a little bit too far from the position I want to be in, and in the Constructors’ championship, which is more important this year because I’m not fighting for the Drivers’ championship, I want to have the team to at least finish in fourth place, behind the top three teams. But we are a little bit too far now from Red Bull. They have 21 points I think, so now it’s up to us and I take responsibility as well to score points and to help the team to finish fourth.

QUESTIONS FROM THE FLOOR

Q: (Frédéric Ferret – L’Equipe) Fernando, how important has it been to finish first this afternoon?
FA: No, not very important. I prefer to finish first tomorrow afternoon. I think today I just need to feel happy with the car, to test something that we plan every weekend, and sometimes you have the opportunity to have a clear answer, sometimes not, and today everything went perfectly, apart from the failure of the engine this morning, and in the afternoon we planned two or three set-up changes, we did them and we had some positive answers, so we’re happy because of that, not because of the time.

Q: (TV Nova) Nico, you made a mistake in Canada, yet you are penalised at the French Grand Prix. Does that seem to be a little unfair and are there any considerations to maybe change this rule for the future?
NR: Well, I’m not sure. At the end of the day, if you just look at my case I didn’t do anything to anybody else, because Lewis was already out of the race anyway, so that would be a bit unfair. But you have to look at the whole picture. Me and Lewis did the same thing, more or less, so he deserved to get a ten places’ (penalty) and then I think I deserve to get that too, unfortunately.

Q: (Dan Knutson – National Speed Sport News) You tried out the new safety car procedure after practice. What do you think of it?
SB: It was obviously without an incident on the race track, so it was difficult, there wasn’t a safety car in place. It seems to be functioning, at least in my car it was. You just have to basically… in the end you can only go as fast as the car that’s going in front of you which was my case. We will see how it plays out.
NR: It’s a bit strange at first because you have to look at your dash (board) quite a lot also, and at the same time you’re probably going to be passing the incident and everything. But we will see. They really need to find something to improve the current thing, because there’s too much chance involved in terms of the result, afterwards. It could be a step forward, we will see.

Q: (Andrea Cremonesi – La Gazzetta dello Sport) Fernando, what is the realistic target for this Grand Prix, and what is your aim for next season?
FA: For this weekend, we hope to finish in the top five in the race, that’s the target. Maybe the podium possibility is not too far but we probably need some luck and to have a very good qualifying tomorrow, and we need to have a think about our strategy and to have something better than the others. If not, our normal place will be fourth or fifth with Hamilton obviously behind us. If he can make up some places and finish in front, maybe fifth or sixth. So we will see what we can do, but for sure we need the points and we are ready to take them.
The aim for next year and for the future is not clear. It’s only the seventh or eighth Grand Prix of the season and at the moment all my focus and concentration is on this year. I don’t want to finish the season with only nine points with no podiums, that’s for sure. I definitely want to be on the podium this year and hopefully not only once and hopefully maybe we have a chance to win a race. In Canada we were close, with a little bit of luck etc. maybe we can win one race. I’m ready to fight for it. Next year, we will see. As I said, after we do this job, which is doing better at the end of the season than what we are doing now, we will see what possibilities we have.

Q: (Andrea Cremonesi – La Gazzetta dello Sport) This question is about football: on Sunday there will be this match between Italy and Spain. Of course you (Fernando) are a fan of Spain. I would like to know who is the most impressive football player of Spain? (And) who is the Italian football player you fear most?
FA: In Spain? We only worry about Pirlo and he is not playing, so it will be quite easy, I think! Spanish player? For me the best one is the goalkeeper and we will probably not use him! He will be ready for the semi-final.